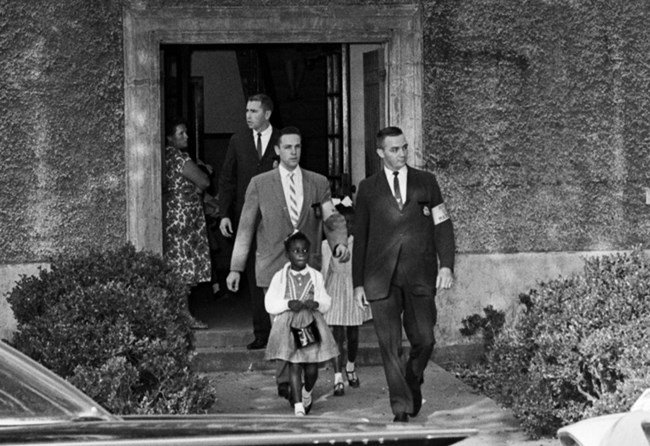 This March, Women’s History Month, Steeg Law is delighted to shine the community spotlight on the Civil Rights pioneer Leona Tate and her organizations, the Leona Tate Foundation for Change and Tate Etienne Prevost Interpretive Center.

On November 14, 1960, six years after separate black and white schools were ruled unconstitutional in Brown vs Board of Education, three 6-year-old girls, Leona Tate, Gail Etienne and Tessie Prevost known as “The McDonogh Three,” made history when their tiny feet climbed the 18 stairs of McDonogh No. 19 Elementary School to desegregate the then all-white school. On that same morning, escorted by Federal Marshals through a crowd of protesters, Ruby Bridges integrated William Frantz Elementary located in the upper 9th ward at 3811 North Glvez Street. The four 6-year old girls became the first African Americans to integrate formerly all-white schools in the Deep South. Together, they are known as “The New Orleans Four.”

In 2009, Ms. Tate created the Leona Tate Foundation for Change (LTFC) to continue educating the public, in particular young people, on the lessons of Civil Rights and minorities’ struggle for equality. The organization was born on the principle that in order to achieve harmony among humankind, every person should be afforded comparable opportunities and exposures. A component essential to implementing this principle is providing access to equal educational opportunities for greater New Orleans area youth. 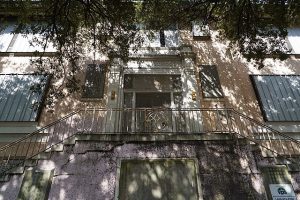 LTFC and its partner Alembic Community Development announced on January 31, 2020 that they closed on the purchase of the McDonogh No. 19 Elementary School building located in the Lower 9th Ward at 5909 St. Claude Avenue in New Orleans, Louisiana. On March 9, 2020, 60 years after climbing McDonogh’s steps, this Civil Rights pioneer broke ground on the Tate Etienne Prevost (TEP) Interpretive Center which will be located at the historic landmark.

Steeg Law is proud to have represented the Foundation as it entered into contracts related to this project, especially those with its valued partner, the leader among the development group, Alembic Community Development, Inc. We are honored to to share Leona Tate’s story and raise awareness for her organizations.

The Leona Tate Foundation for Change

The Leona Tate Foundation for Change’s (LTFC) mission is:

LTFC is dedicated to preserving, interpreting and disseminating the story of the Civil Rights struggle for equal education in New Orleans, by sharing the story of the three African-American girls who integrated McDonogh #19 in 1960. LTFC seeks to reach people of all ages and ethnicities, with a special emphasis on educating young people about these struggle.

Leona Tate is frequently invited to schools and universities to share her story. She seeks to inspire young people by acquainting them with the courage of ordinary people in the struggle for equality. LTFC devotes her time in educating new generations and encouraging their participation in ongoing efforts to build a more just society.

The lead project of the foundation is to preserve and re-purpose the McDonogh #19 school as a memorial museum and multi-purpose center in New Orleans, with significant goals:

Learn more about the Leona Tate Foundation for Change>>

The historic McDonogh No. 19 building in the historic Lower Ninth Ward of New Orleans, Louisiana, still stands and serves as a testament to the role New Orleans has played in the American Civil Rights movement. The building has sat vacant since it was closed in 2004 and was damaged one year later by Hurricane Katrina. Leona Tate has worked for many years to reopen the school as a monument to the vital history it represents.

The historic landmark will be renovated and transformed into a museum to be named after the three Civil Rights pioneers who integrated the school. It will be called the Tate Etienne Prevost (TEP) Interpretive Center. The center will host exhibits, including films, photos, oral histories and interactive media that will guide visitors through the history of desegregation in New Orleans, integrating schools, department stores, movie theaters and restaurants, as well as resistance and sit ins, to the numerous protests, the history the 9th Ward and other significant experiences during the height of the 1960s Civil Rights Movement in the City of New Orleans.

School desegregation in New Orleans invoked a pivotal turn for the progress of the Civil Rights Movement. It is so fitting that the TEP Interpretive Center will come to fruition in the same year that marks the 60th Anniversary of school integration in New Orleans, In addition to the exhibits, the center has partnered with The Peoples Institute for Survival and Beyond which will provide training, classes and workshops to facilitate its signature Undoing Racism Series as part of their Coumminversity.

Over the new year, the three-story newly renovated space at TEP Interpretive Center will have 25 units of deeply affordable housing for seniors.